IBM is looking to expand its Watson cognitive computing platform into many more fields, including cloud and healthcare. This includes bringing in more partners and developers.

20 Great Ideas To Steal In 2015
(Click image for larger view and slideshow.)

Moving aggressively on several fronts, IBM announced Tuesday that it is expanding the offerings of its Watson cognitive computing platform to focus more on cloud computing initiatives, as well as on healthcare -- a market where the tech giant sees substantial opportunities.

First, Watson Health will consist of about a dozen medical institutions using the Watson platform to aid genomic-based cancer treatment. Big Blue also detailed a new program that will add development partners who will contribute to the Watson platform.

In addition, IBM will be offering Watson as part of a hybrid-cloud solution. The new capability is being offered through the Watson Zone on Bluemix, IBM's cloud-innovation platform.

The multiple announcements were made at a packed public event at the Brooklyn Botanical Garden on May 5.

Cognitive computing offers one approach towards analyzing pools of big data for any possible insights that could aid a corporation or institution in making a better decision. Only a few years ago, big data was the province of Fortune 50 firms hiring PhD-grade researchers who could craft the algorithms needed to seek those insights. Since then, the simplicity of the front-end has been so reduced that a practicing expert in his or her profession can now conduct a query.

In the case of Watson, the front-end is voice recognition. The user asks a question.

"This completely redefines how an individual interacts with information," said Stephen Gold, vice president for IBM Watson, in an interview before Tuesday's event. "Now it is easy and intuitive to interact with the (computing) environment."

That simplicity is colliding with dire need on the medical front. 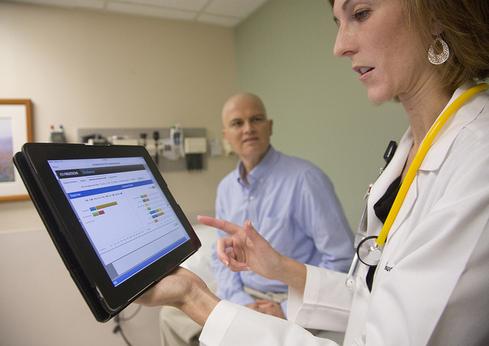 IBM believes that healthcare is the key to Watson's growth.

By the year 2020, healthcare data will be doubling every 72 days, noted Gold. This is up from the present-day doubling every three years. About a tenth of this data will involve treatment, another third will consist of genomic sequences for individuals, and half of that data will come from medical instruments and wearable devices.

"It is humanly impossible to keep up with this data," Gold explained. "It is the Internet-of-Things on steroids."

As far as using Watson Health on cancer genomics, Gold pointed out that a human genome can amount to about 100GB of data. Researchers could use Watson Health to sift through that data to craft a precise, genetic approach to attacking a specific tumor, rather than rely on chemotherapy, radiation, and surgery.

[ Read about IBM and quantum computing.]

IBM continues expanding its base of developers who are crafting new applications with the Watson platform. Included in the May 5 announcement were new Watson apps by Talkspace, Go Moment, Decibel, and Epic; client engagement apps with Line Hotel, Centura Health, and Aberdeen Veterinary Clinic; a content partnership with the Associated Press to expand Watson's knowledgebase; and AlchemyData service to aggregate, analyze, and organize historical news and editorial data.

For developers, IBM is offering access to Watson, the necessary software development kit, and any other components needed for crafting a solution at no price to the partner. IBM cashes in when there is a product ready to go to market, splitting the revenue between the developer and the company at a rate fixed by contract.

Finally, a hybrid-cloud solution is being offered in response to customer demand. Gold noted that this is especially pertinent in healthcare, where HIPAA requirements call for patient records privacy. The solution is best delivered on-premises, while also ensuring that access to public data is readily available.

IBM is shifting its attention to new technologies to revive growth after five years of paying more attention to investors. By concentrating on cloud, analytics, mobile, social, and security, IBM hopes to grow sales in these areas from $25 billion in 2014 to $40 billion by 2018. Cloud-computing services accounted for $7 billion in revenue alone last year.

[Editor's note: This story has been updated to clarify the name of the University of Southern California Center for Applied Molecular Medicine.]

It will happen at some point. Will IBM's programmers have to start carrying liability insurance?
Reply  |  Post Message  |  Messages List  |  Start a Board
InformationWeek Is Getting an Upgrade!