IBM is building new West Coast office in San Francisco for its IBM Watson system, while Big Blue has added some capabilities, including ones for social media and productivity.

Big Blue announced Thursday, Sept. 24, that there will be a new Watson hub in San Francisco, along with upgraded capabilities and tools.

The West Coast location will also serve as the new global headquarters for IBM Commerce, the company’s effort to increase "customer to business relationships" with computer technology.

IBM said that the teams there will collaborate to integrate Watson solutions with the company's Commerce portfolio that is designed for retailers and consumer products organizations. Located at 505 Howard St., the San Francisco facility will open in early 2016.

IBM also wants to be closer to the tech action going on in Silicon Valley.

"This [hub] will put IBM closer to, and increase collaboration with, the local startups, developers, venture capital groups, established businesses and academic experts the company is currently working with to take cognitive computing into new markets," according to IBM's statement. 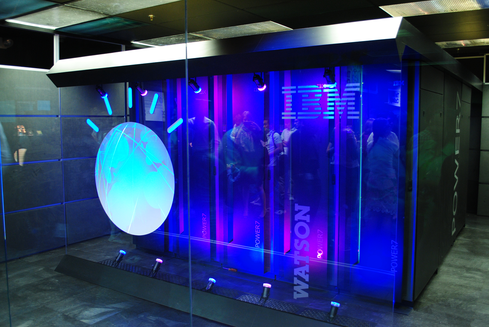 In less than two years, the Watson platform has grown from one initial API -- made famous by its use on the TV show Jeopardy! to defeat a human competitor, and a limited set of application-specific deep Q&A capabilities -- to more than twenty-five APIs powered by more than 50 different technologies.

(One interesting fact: The name Watson has nothing to do with Sherlock Homes or the guy Alexander Graham Bell was calling for on the first telephone. Thomas J. Watson, who the system is actually named after, lead the company from 1914 to 1956.)

One of the new Watson services for developers is an improved language service that will "enable cognitive applications to understand the ambiguities of natural language in text." It is aimed at finding answers for users even when questions are asked in varying ways.

[The robot overlords are not taking over, just yet. Find out how robots and human will work side-by-side.]

This moves Watson into social media through image analysis.

The Visual Insights feature works to, as IBM puts it, to "give users tools to ensure consistency across those social media channels, segment customers to an individual level, create targeted campaigns, and align their social media output to followers' preferences by running comparative analysis with competitors' feeds."

A user will input a grouping of image files and get back a tagging profile that rates how common each tag is in the photo collection. Each tag's score is a combination of confidence and prevalence, ranging from low (zero) to high (one).

All your photos on Facebook now belong to Watson.

Watson will be watching you, no matter how you connect.

Larry Loeb has written for many of the last century's major "dead tree" computer magazines, having been, among other things, a consulting editor for BYTE magazine and senior editor for the launch of WebWeek. He has written a book on the Secure Electronic Transaction Internet ... View Full Bio
We welcome your comments on this topic on our social media channels, or [contact us directly] with questions about the site.
Comment  |
Email This  |
Print  |
RSS
More Insights
Webcasts
Fintech at SaaS speed: Navigating the scale & security challenge
4 Practical Tips for Building a Data Lake
More Webcasts
White Papers
Bandura Threat Intel Integrations Infographic
Case Study: Evans & Dixon LLC Increases Cyber Threat Protection with Bandura
More White Papers
Reports
The State of Malware Threats
Enabling Enterprise Resiliency Through Cyberthreat Detection
More Reports