Why Alternate Payment Schemes Get No Love - InformationWeek

Consumers will never adopt a payment scheme en masse if it's less convenient than the current method. Why should they? Currently, retailers and card issuers assume the liability. I'm not on the hook for fraudulent charges. See a suspicious item that got past the card provider's fraud detection? Call the handy 800 number and have it removed. Worst-case scenario: I get issued a new card and have to invest 30 minutes to change standing accounts.

Look, it's not me. It's you. Retailers lose consumer data all the time, because PCI is still a joke, and card issuers continue to argue with retailers over who will pay for more secure point-of-sale systems. They're balking at reissuing cards with embedded chips in the US.

Why should I inconvenience myself to save their butts? Even if EMV-capable POS systems were widely installed by 2015 and issuers invested in changing over to chipped cards -- not at all a certainty -- that would do nothing for purchases where the physical card isn't present.

Not that we don't appreciate what you're trying to do. I recently saw a local TV news segment about the Boston startup Abine and its masked credit cards. For $5 a month, the company will issue me an electronic account that lets me generate one-time-use virtual cards every time I make a transaction online. Do you know how much I shop online? The company is also piloting physical OTP cards, like those from MtGox and others, that bear only a superficial resemblance to a standard credit card.

So let me get this straight: I can pay for the privilege of enduring glares as I hold up the line at the grocery store trying to explain the OTP concept to a bored 17-year-old clerk? 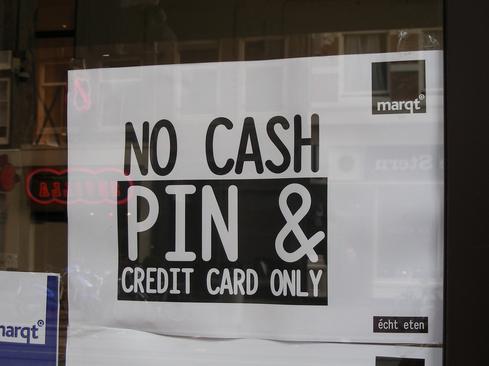 It's a nice thought. It really is. And a subset of privacy-aware consumers will adopt technologies like one-time-use or masked cards. They're the same people who use Bitcoins. Good luck going mainstream.

A more promising avenue is paying with your phone using an NFC wallet. Financial data, including credit and debit card numbers or prepaid balances, are stored on your SIM card or in the cloud. You just touch the phone on an NFC-enabled POS terminal and enter a passcode. This approach has potential, but there's no interoperability standard. Square competes with Google Wallet, which competes with Apple Passport. MasterCard competes with Visa, except where it doesn't. Individual retail chains such as Starbucks have their own iterations.

Oh, and most NFC systems reuse current retailer networks and POS equipment. Explain again how that's any more secure than a credit card, given the sad state of the regs that are supposed to protect us now?

PCI turned 10 this year. Verizon's 2014 PCI Compliance Report says use is up. Unfortunately, so is the cost of card fraud -- the Nilson Report says businesses lost $11.27 billion from it in 2012, or 14.6% more than the year before. But before you break out the tiny violins, only the largest merchants undergo formal PCI audits. Most businesses conduct self-assessments. In 2013, Verizon reports, only 11.1% of organizations were fully compliant with the PCI standard at the time of their annual baseline assessments, up from 7.5% in 2012. Only about 64% met even the most basic requirement: a firewall to protect cardholder data. A firewall. Think about that.

No wonder startups see opportunity. But beyond the I-have-an-opinion-on-Bitcoin demographic, this particular risk/reward ratio just isn't going to overcome the power of inertia.

"Even those who have been hit with hard-core identity theft won't buy in," Michael A. Davis, CTO of the endpoint security firm CounterTack, told us. "People are desensitized to fraud and ID theft. It's just part of life, especially when financial services companies absorb all the impact of the theft."

Of course, those costs eventually get passed along to consumers, but that passalong is opaque. Until there's a payment method that's as easy to use as today's swipe-and-sign cards and is as universally accepted, both online and in stores, most consumers will sit tight. Don't take it personally.

Lorna, you're probably right about AMEX, VISA, Mastercard and other card providers. Pay Pal is probably looking pretty attractive right now to the electonic wallet crowd.  One question though is whether they would guarantee to cover (absorb) fraudulent purchases, the way the credit card companies now do (and promote).

Wyatt, AmEx, MasterCard and Visa have to be living in fear that EBay/Paypal, Google and Apple will decide to stop infighting and band together to come up with a simple, secure and widely accepted standard way to implement a mobile wallet. All that's keeping the status quo is fragmentation.

Kurt Marko pointed me to news that Icahn is pushing EBay to spin Paypal out. Interesting times.
Reply  |  Post Message  |  Messages List  |  Start a Board

I didn't say (or mean to imply) that EMV cards are less convenient. I have one, and it's no different from using any card. The cards I am disussing are these:

Not sure where you shop, but I promise you, an OTP card is jamming up the line at my local market.
Reply  |  Post Message  |  Messages List  |  Start a Board

I have to agree. What the Target breach taught us is that the vulnerabilities are in the architecture that carries the data, not the cards or EMVs.

That said, cards that require PINS would have saved American Express $1800 last week, after someone made off with my AMEX card and went on retail buying spree, merrily swiping my card at a dozen stores.  If I hadn't alerted AMEX the card was missing, he/she might have wrung up another $1800 or more in charges. A PIN would have prevented that.  But I'm a happy AMEX customer.  The wiped the charges off my account and sent me a new card.

One suspects its cheaper for them to write off the losses than to get behind a national campaign for smarer card systems that retailers, already unhappy with the percentage card issues collect, are unlikely to pay.

bwalker, I was talking about new electronic cards like the one I saw on the news segment. There's no way in a zillion years I would use a debit card linked to my bank account.

Absolutely we all pay for fraud - but at some point, does it make sense to spend a lot as an ecosystem on chip and pin POS systems when they supply only incrementally more security than what is in place now?
Reply  |  Post Message  |  Messages List  |  Start a Board

The arc of history bends not only towards justice but towards convenience. On Monday, I didn't even slow down at a toll plaza (EZPass can now read at 55 MPH). I no longer need to research new artists; Amazon tells me what I want. Heck, I can deposit a check by taking a photo of it with my phone. Cash is convenient for very small purchases like those Chris describes, but overall, people prefer to use plastic, if only to rack up whatever rewards they get. That 2% back adds up over time.

While I agree chip and pin will help, unless CC providers figure out how to meld convenience and security, the field is open for a disruptive new tech. Just wish I knew what it was ..
Reply  |  Post Message  |  Messages List  |  Start a Board

No, I still use a credit card for nearly everything -- I'm exactly the person Lorna describes, who figures the risk falls on someone else. The only things I can remember paying cash for the past two weeks are a middle school basketball game admission and a parking meter (and more street parking systems around here are starting to take credit).
Reply  |  Post Message  |  Messages List  |  Start a Board

I actually now have an EMV card, but have yet to notice a PoS system that takes advantage. And all that stops is fraud with the physical card. The back end is still wildly insecure. You wrote about PCI how many years ago, and the Verizon report shows not much has improved.

I agree the US will gradually move to EMV. However, is that just a false sense of security?
Reply  |  Post Message  |  Messages List  |  Start a Board

Agree, Drew. And it's proven technology in Europe already....
Reply  |  Post Message  |  Messages List  |  Start a Board
InformationWeek Is Getting an Upgrade!