Have you ever wondered what Earth looks like from space in high definition? Just follow NASA's new live video feed from the International Space Station (ISS) on Ustream.

On April 30, the space agency activated its High Definition Earth Viewing (HDEV) experiment, involving four commercial HD cameras aboard the ISS. The Earth-facing cameras, which are enclosed in a pressurized and temperature-controlled housing, began streaming video live to the world on May 1. But viewers will have to wait a little longer to enjoy the live feed.

NASA ran into some problems when the video feed went offline due to a communication issue between HDEV and ground stations. The live stream is down temporarily, but NASA is working to fix the issue, said a spokesperson for the agency. A NASA spokesperson didn't give a timeframe.

The experiment was transported April 18 on a SpaceX CRS-3 cargo resupply mission to the ISS. The SpaceX Dragon spacecraft carried approximately 2.5 tons of science investigations, vehicle hardware, spacewalking equipment, and supplies for the crew. HDEV was one of the first payloads to be delivered in the unpressurized "trunk" of the Dragon, the spokesperson said.

The box containing the HD cameras is currently attached to the Harmony module, a utility hub that supports systems essential to the ISS. High school students helped design of some of the HDEV components as part of a program called High Schools United with NASA to Create Hardware (HUNCH). The majority of the operations will also be performed by student teams, according to the agency. 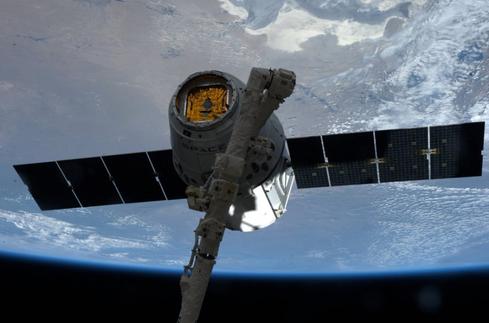 HDEV cameras are fixed and require no zoom, pan, or tilt mechanisms. "The video imagery is encoded into an Ethernet compatible format for transmission to the ground and further distribution. In this format, the video can be viewed from any computer connected to the Internet," NASA said on its website.

The experiment's goal is to assess camera quality for use in space, while also capturing Earth imagery. NASA hopes to find out how the hardware is able to survive and function in the extreme radioactive environment of low-Earth orbit. This will help engineers decide which cameras are best to use on future missions.

This isn't the first time that NASA has streamed video from the ISS. There is a separate live video feed that has been around for several years. The Live_ISS_Stream on Ustream takes NASA's regular downlink video feeds from the ISS and offers them to the public, sometimes including video from inside the station. Unlike the HDEV experiment, the feeds are transmitted in standard definition. It is the first of six downlink channels available to mission controllers to monitor and assist astronauts in orbit in real-time.

Elena Malykhina began her career at The Wall Street Journal, and her writing has appeared in various news media outlets, including Scientific American, Newsday, and the Associated Press. For several years, she was the online editor at Brandweek and later Adweek, where she ... View Full Bio
We welcome your comments on this topic on our social media channels, or [contact us directly] with questions about the site.
Comment  |
Email This  |
Print  |
RSS
More Insights
Webcasts
The Failures of Static DLP and How to Protect Against Tomorrow's Email Breaches
How Elite Analyst Teams are Transforming Security with Cyber Reconnaissance
More Webcasts
White Papers
Zero Trust Evaluation Guide
Full Body Exposure: CybelAngel Analysis of Medical Data Leaks
More White Papers
Reports
2020 Threat Hunting Report
Building an Effective Cybersecurity Incident Response Team
More Reports

The good news, the video feed is back up.  But that doesn't always mean there's a view, most notably when the space station is on the night side of the Earth. Here's a quick guide:

***QUICK NOTES ABOUT HDEV VIDEO***
Black Image = International Space Station (ISS) is on the night side of the Earth.
Gray Image = Switching between cameras, or communications with the ISS is not available.
No Audio = Normal. There is no audio on purpose. Add your own soundtrack.
Reply  |  Post Message  |  Messages List  |  Start a Board

How long will it be before NASA turns to streaming pledge breaks to raise funds?
Reply  |  Post Message  |  Messages List  |  Start a Board
Editors' Choice
Hot Topics