Monster, the Consumer Electronics Association, and other technology entities have launched USTechVets.org to match veterans with civilian tech jobs.

Monster Worldwide, the Consumer Electronics Association, and several technology business groups have launched a job site that focuses on moving veterans to civilian careers within the technology industry. Announced at the 2014 International Consumer Electronics Show, USTechVets.org offers free tools and resources for former military personnel and for employers interested in attracting veterans. 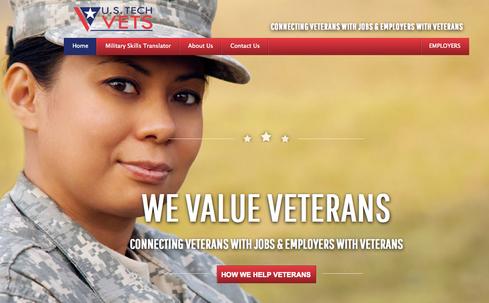 USTechVets.org uses Monster's 6Sense semantic search technology, a more intelligent version of traditional keyword search engines that can contextually interpret the meaning behind words. The resources available on the site include a tool that matches a veteran's skills and training to civilian jobs, a searchable database of jobs in the technology sector, and educational resources to help veterans develop skills in the private sector.

The site also has a page dedicated to the tuition assistance benefit paid to eligible members of the Army, Navy, Marine Corps, Air Force, and Coast Guard. A page for wounded warriors redirects visitors to Monster's Military.com veteran career network.

USTechVets.org was created as a joint effort by Monster, the Consumer Electronics Association, and the Northern Virginia Technology Council with support of several other industry associations. For examples, CompTIA, a nonprofit trade group that offers IT certifications, is participating.

"Veterans with the right mix of business, communication, and technical skills can find rewarding careers in the tech industry," Todd Thibodeaux, president and CEO of CompTIA, said in a press release. "In the past two years, some 16,000 veterans have earned nearly 22,000 CompTIA certifications. These IT skills certifications can be a first step in transitioning from active duty to civilian life."

In a survey released in November by the Military Benefit Association and MetLife, 79% of unemployed veterans who have started a job search said it's somewhat difficult to translate their military skills into something to which a civilian hiring manager can relate. Meanwhile, 72% of hiring managers said they find it somewhat difficult to determine the suitability of a recent veteran's skill set from a resume.

Veterans have a variety of resources to help them move into the civilian workforce. The Department of Veterans Affairs (VA) has several sites dedicated to careers at the VA, other federal agencies, and the private sector. They include VA for Vets, VA Careers, Vet Success, My Career @ VA, and Feds Hire Vets. The Office of Personnel Management runs USAJobs.gov, an online job board for federal job seekers.

Steve Cooker, executive vice president of global government solutions for Monster Worldwide, told us in an email that what makes USTechVets.org unique is that it provides association members access to the single largest veteran resume database. Monster keeps a database of more than 800,000 veteran resumes. The site also offers veterans direct access to a multitude of technology jobs and the opportunity to have their resumes seen by thousands of technology industry employers, Cooker said.

Elena Malykhina has written for The Wall Street Journal, Scientific American, Adweek, and Newsday. She covers the federal government, including NASA's space missions, for InformationWeek.

Too many companies treat digital and mobile strategies as pet projects. Here are four ideas to shake up your company. Also in the Digital Disruption issue of InformationWeek: Six enduring truths about selecting enterprise software (free registration required).

We welcome your comments on this topic on our social media channels, or [contact us directly] with questions about the site.
Comment  |
Email This  |
Print  |
RSS
More Insights
Webcasts
What We Can Learn from Sports Analytics
Protecting Your Enterprise's Intellectual Property
More Webcasts
White Papers
From MFA to Zero Trust
Two-Factor Evaluation Guide
More White Papers
Reports
The State of Cloud Computing - Fall 2020
The Drive for Shift-Left Performance Testing
More Reports

One would think. But many of the skills vets learn are as much about procedures as technology, and on systems that are unique to military operations.  So familiarity with using SMEPEDs, for instance, (Secure Mobile Environment Portable Electronic Devices) on classified networks just doesn't translate easily in the civiliam world.

That statistics cited here show the veterans are having a hard time describing their experiences and the hiring managers are having trouble translating it. Why such a language gap? Surely many veterans have security, mobile, and big data skills to bring to the table -- all hot skills in today's IT job market.
Reply  |  Post Message  |  Messages List  |  Start a Board
Editors' Choice
Hot Topics