Instead of just delaying the new medical coding system, we should be rethinking the necessity of it.

Congress, an organization that has elevated kick the can to an Olympic-level sport, has decided to delay ICD-10, an initiative that promises to transform healthcare by solving the heretofore unsolvable problem that our billing systems aren't complicated enough.

IT consultants and vendors are acting like my Yorkshire terrier deprived of his favorite plastic bone. The frantic high-pitched barking has made it clear that this delay is the worst thing imaginable. Sunk costs! Unfair to good organizations! Uncertainty! Sky falling, film at 11! About the only complaint we haven't yet heard is that the slightest bad thing is going to happen to patients or providers.

That's probably because it won't. The transition to ICD-10 doesn't change models of payment or introduce new concepts in medicine. It's really just about replacing an old and worn billing code set with one that is more complicated and less understood. An overwhelming majority felt that the best possible short-term outcome from October was going to be no change -- no major hit to revenues, no major confusion, and nobody going out of business. Given the anxiety we've been seeing lately, with federal and state governments demonstrating a distinct lack of success in the IT area, revenues and margins savagely squeezed for provider organizations, and an industry-wide concern about how ICD-10 was really going to work in practice, most of us weren't betting on the best possible outcome.

[Who's complaining? Read ICD-10: Painful To Implement, Painful To Delay.]

ICD-10 is a diagnosis terminology intended for use in fee-for-service medicine. It's designed to capture distinctions that might make payment differences. It doesn't effectively capture prognosis, diagnostic uncertainty, patient choices, planning realities, or anything else that might drive excellent care. Providers will likely treat it as they did ICD-9, minimizing its use except as needed to support revenue. If you think that multiplying the number of billing codes will help, consider that only a small percentage of ICD-9 codes ever appear in a patient record. Complexity for its own sake has already been considered and rejected by the people who produce the data in the first place.

The American Medical Association (AMA) has been firm in its opposition to ICD-10. So have influential individuals within healthcare, at least if you ask them privately and thoughtfully. That opposition was never about whether better documentation and better reporting would help. The question was whether ICD-10, as conceived and implemented, would make meaningful improvements that are worth the cost.

In early 2014, that cost was looming larger and larger. The HealthCare.gov go-live at a minimum highlighted the perilous nature of large government-driven IT projects. Meaningful Use 2 is by itself stressing organizations more than anyone expected in the early days. Timelines are short and IT projects (electronic medical record replacement and upgrades in particular) have slipped. The ICD-10 go-live on Oct. 1, 2014, was clearly an all-or-nothing, life-threatening event that relied on meticulous IT performance and strong organizational focus. And the deadline was drawing near. 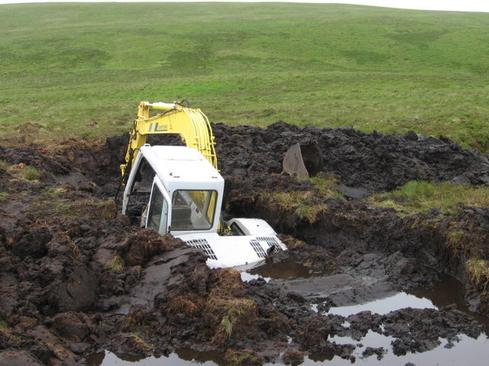 The First Rule of Holes says that when you realize you're in one, stop digging. The ICD-10 hole was growing too large to ignore. So Washington, in a rare fit of sanity, told everyone to put down the shovels.

It's a delay, not a cancellation. We're still in the hole. We're still stuck with too many organizations too dependent on fee-for-service reimbursement. Risk-sharing and accountable care are still really hard to figure out. The people who serve our shared patients -- payers, providers, regulators, and physicians -- still live with historic hostility and regulatory barriers. We can go right back to determinedly digging if we want. In fact, that's still the official plan.

As we lean on the shovel, though, it might make sense that we consider stepping out of the hole. There's no natural law that says we have

Dick Taylor, MD, is managing director and chief medical officer of the Advisory Services Division of MedSys Group. Dr. Taylor focuses on integrating IT efforts with the clinical and operational ownership needed to capture permanent and positive changes within healthcare ... View Full Bio
We welcome your comments on this topic on our social media channels, or [contact us directly] with questions about the site.

Comment  |
Email This  |
Print  |
RSS
More Insights
Webcasts
Securing and Monitoring Networks in the 'New Normal'
What We Can Learn from Sports Analytics
More Webcasts
White Papers
5 Steps to Zero Trust in the Data Center
MPLS, SD-WAN and SASE
More White Papers
Reports
The State of Cloud Computing - Fall 2020
How IT Security Organizations are Attacking the Cybersecurity Problem
More Reports

Thanks for sharing your thoughts, Deborah. I had a feeling you'd have something to say about this.
Reply  |  Post Message  |  Messages List  |  Start a Board

The ICD-10 delay has provided the opportunity to organizations to take a step back and either take the extra time provided to make sure the implementation is complete and training is in place, or to work on other things and then go back into scramble mode a few months before the new deadline. Most organizations will use the delay to good use...by ignoring the ICD-10 project until time is almost up again and working on all the competing projects that are out there, that were pushed aside to work on the compliance efforts. The organizations will work on those projects that increase revenue and the patient population. Time is being spent, not on the delayed initiative, but on those thgings that will impact revenue directly. Doctor Taylor suggests an alternative would be to continue to use ICD-9 diagnosic and procedure codes, even thoguh the rest of the world is already using ICD-10 and plans are underway for ICD-11's world-wide introduction. Unfortunately, full compliance by all providers, and payers, ICD-10 won't work. The codes are not easily intercahngeable to have one provider submitting claims in ICD-9 format to one payer and another provider submitting ICD-10 to another payer. Without the initiative and a firm deadline, organizations will not complete the implementation. What is the incentive? Higher rates of payments would be an incentive to the providers, and a non-incentive to the payers. ICD-10 doesn't even come with that association of higher reates of reimbursement. It comes with the association of being able to classify diagnosis codes and procedures to more finite classifications. We'll be able to run reports and know how many injuries to the left arm from a baseball thrown at over 60mph have been treated in a certain date range. Someone might need to know that.

As one of the IT folks who is now working on other items. specifically those that were put on hold for the ICD-10 work, part of me welcomes the delay. I get to clean up some of my To Do list. The other part of me wants to get the ICD-10 project done, tested, and into Production so it's not on the list at all.

Change is hard. Changing the change makes everyone's life hard and leads to a disbelief that the compliance will ever be enfourced. Set a date. Make it stick, IT has shown that it will meet stringent compliance dates. We weren't late with the Y2K bug fixes! That was a date no one could change. We would have made the 10/1/2014 date, if it hadn't changed. We will make the 10/1/2015 date, if that one sticks.
Reply  |  Post Message  |  Messages List  |  Start a Board
Editors' Choice
Hot Topics

More Informa Tech Live Events
How Elite Analyst Teams are Transforming Security with Cyber ReconnaissanceBuilding the SOC of the Future: Next-Generation Security OperationsROI and Beyond for the Cloud