For better or worse, execs prove the power of social leadership. From Benioff to Ballmer, how do tech's bigwigs stack up? 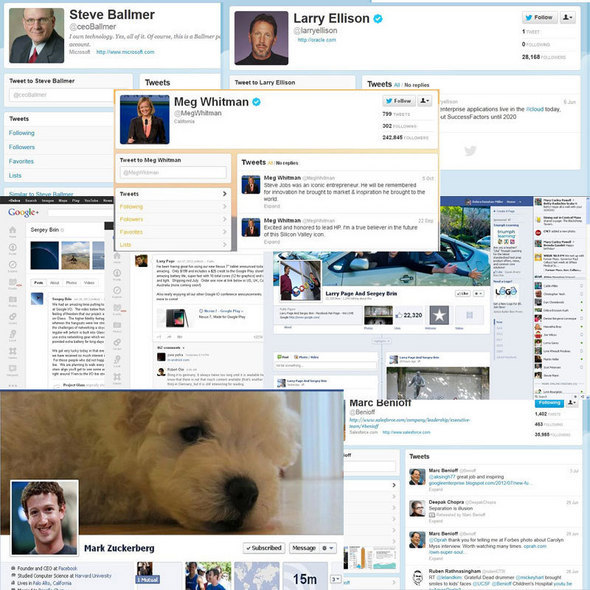 A couple of recent surveys indicate that it is important to employees and customers alike for companies’ top brass to actively engage on social media. When it comes to active engagement, however, some do it better than others.

BRANDfog’s 2012 CEO, Social Media & Leadership survey questioned several hundred employees from organizations ranging from startups to Fortune 500 companies. Respondents worked at all levels of their companies, which represented a variety of industries and regions. Respondents were asked to answer questions pertaining to social media participation by their organization and executive leadership team, as well as about their perception of other companies and brands based on the same criteria. The vast majority of respondents—86%--said it was somewhat important, very important or mission-critical for company executives to engage in social media. Eighty-two percent said they were more likely or much more likely to trust a company whose CEO and leadership team actively engage on social media.

The survey found that 81% of respondents believe that CEOs who engage in social media are better equipped than their peers to lead companies in a "Web 2.0 world." Respondents further said they believed that social media participation by their leadership led to better engagement with stakeholders across their organizations. This included better connections with customers, and engagement with employees and investors.

A survey from Deloitte queried both executives and employees about the impact of social media engagement and found some disparity between the thinking of the two groups. For example, 45% of executives believe social media is good for their companies’ culture while only 27% of employees agree. As reported by Mashable, the survey found that executives think social media has a positive impact because it allows managers to be more transparent (38%), helps build and maintain relationships among colleagues (46%), helps build company culture (41%), and fosters a feeling of connection to the company and its leadership (37%).

It’s likely that the gap between what executives think and what employees think will narrow as social moves further and further into the mainstream. Check out our slideshow for some lessons learned from the real-life Facebook and Twitter accounts of seven execs in the tech industry, some of whom "get it" and some of whom are a lesson in what not to do.