Stanley Black & Decker sees an expanded role for itself in the digital economy and is exploring how AWS Greengrass will enable it to launch new services.

The future at Stanley Black & Decker isn't in the intelligence that might be added to tools the company manufactures. It's in the ability for those tools to gather data that can be communicated to and understood by other systems in the business. That's according to Hamid Montazeri, director of software engineering for the Digital Accelerator Group at the popular power tools maker.

The accelerator group serves the lesser known business and industry side of Stanley Black & Decker. It's the job of this organization to come up with software and devices that might help a manufacturing floor function better or help a facilities staff manage a smart building complex.

Montazeri is aiming to tie tools and controllers at the edge of the network to systems of intelligence that know what the data gathered by the tools means. For that reason, Montazeri said Stanley Black & Decker is an early adopter of the new IoT service, Amazon Web Services Greengrass.

One reason Stanley Black & Decker is an early adopter, Montazeri said, is because Greengrass runs both in the cloud and out on the edge in devices that need connectivity and greater intelligence. Any device with a 1 GHz core and 128 megabytes of memory can host a Greengrass runtime environment. That runtime can initiate processing of data gathered at the edge, tie it to a more centralized system, and pass along aggregated results to analytics and applications in the cloud.

Unlike other Internet of Things systems, Greengrass doesn't bring a major software application to the edge. Rather it brings a capability to invoke pre-programmed functions developed using the AWS Lambda service, a service that uses a software event to call up a stored function and run it. The functions may be developed in the cloud using Python, for example. When ready, they can be stored in the cloud or with the Greengrass runtime environment on an edge device.

Montazeri said in an interview at the event that Stanley Black & Decker's Digital Accelerator Group was established two years ago to find ways to create industry-facing products that will become part of the emerging digital economy. The group is independent from the rest of the business, so it can't simply demand more servers from Stanley Black & Decker IT when it needs them, he said. Instead, they commission them in the cloud.

"It made sense for us to be in the cloud. It was immediately clear that among the cloud providers, Amazon was the winner," said Montazeri. "We made a conscious decision to automatically tap into any new services that AWS provides as a way to leverage what we could do," he added. 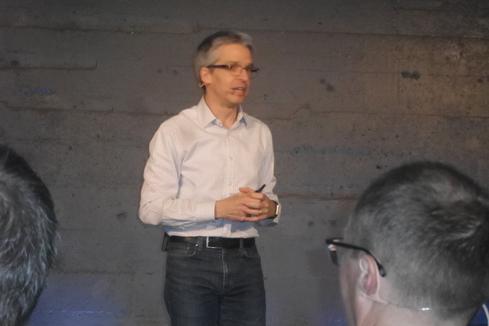 It's part of the accelerator group's charter to figure out how the rest of the company might make use of the cloud, even though two-thirds of its business remains in consumer-oriented hand tools. In the new digital economy, the group can think of lots of ways that tools at the edge and centralized systems might be better together. Montazeri says many uses of tools at the edge and cloud-based systems are just reaching the concept stage.

Known for its power tools, Stanley Black & Decker is also an industrial company, owning Stanley Healthcare, Stanley Engineered Fastening and Stanley Security Solutions. The use of automated fastener installation is part of the automobile industry. Even the iPhone has 60-80 fasteners that get installed automatically, thanks to Stanley Engineered Fastening, Montazeri said.

"We can use Greengrass as a supervisory controller for a lot of things that happen in that (manufacturing) environment," he said.

Because Stanley Black & Decker is an eager adopter of services, making use of Lambda functions is a fit for the other things it wants to do in an edge environment. Montazeri wasn't in a position to discuss upcoming products or ideas for future products, but there were specific elements of Greengrass that match what his company thinks it needs.

For example, a Greengrass device on the edge doesn't need to maintain constant contact with the Internet or with the cloud. "In some cases, connectivity is going to be spotty," he noted. Greengrass knows to temporarily store data and upload it when a connection is available. It includes automatic data synchronization features, he said.

A sensing device on a tool might register that the temperature of the tool is going up as the amount of vibration it's experiencing increases. In some situations, that would be a sign that a component was about to fail. A certain temperature or vibration threshold could trigger a Lambda function in Greengrass to alert the operator and tell him what to do.

Amazon previously offered a bare bones set of IoT Services, which Stanley Black & Decker was also using. "When Greengrass came along, it was natural for us to use it for the edge. It opens a lot of flexibility, a lot of possibilities for us," Montazeri said.

During Dirk's talk, he introduced a gateway that can serve as data collection points for multiple devices at the edge: The Qualcomm DragonBoard 410c, which retails for $75 at Arrow Electronics, is sufficiently powerful to run Greengrass with its SnapDragon processor. Others are available from Dell, Advantech and Samsung. More can be found in this list: https://aws.amazon.com/greengrass/faqs/
Reply  |  Post Message  |  Messages List  |  Start a Board
Editors' Choice
Hot Topics