0%
Tweet
Intel is looking to save $300 million amid declines in PC sales.

SAN FRANCISCO — Intel may cut an untold number of research an administration positions, according to an internal memo obtained by The Oregonian/OregonLive. Following a reduced revenue outlook for 2015, the chip company could aim to cut its budget by $300 million.

The memo was distributed to Intel managers and stated that the company will “prioritize investments, slow down hiring, and drive other efficiencies, including a performance-based involuntary separation package.” Cuts will begin June 15 and conclude one month later for an unspecified number of people, the Oregonian reported. Intel has roughly 106,000 employees worldwide. 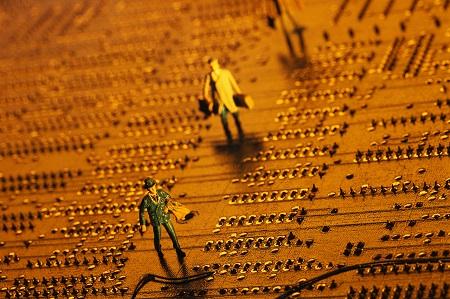 Intel declined to comment on the layoffs. The company reported record revenues in 2014 and flat year-over-year revenues in the first quarter of 2015, due in part to a decrease in demand for PCs.

Read the rest of this article here on EE Times.

This seems like odd timing, since Intel is making such a big push at the moment to not only make the desktop relevant again, so it can encourage PC sales, but also push itself into the wearable and small-form-factor electronics game.

That's not going to happen if it scales back by a significant margin. Streamlining is one thing, but I'd be worried it would lose some of its competitive edge, which has already slipped away in recent years - apart from in desktop CPU performance.
Reply  |  Post Message  |  Messages List  |  Start a Board
Editors' Choice
Hot Topics