Microsoft has teamed with Code.org to roll out a Minecraft-themed coding tutorial as part of the annual Hour of Code. The event aims to inspire broader interest in programming and help create the next generation of coders.

On Monday Microsoft unveiled a Minecraft-themed coding tutorial to teach children (and adults) the basics of computer science as part of Code.org's third-annual Hour of Code.

The free tutorial available now walks students through 14 levels where they are can navigate, mine, craft, and explore in the 2-D Minecraft world by plugging together blocks to complete actions and generate computer code.

For example, students click and drag blocks to form a string of commands. They then click "run" and the character does the actions associated with the command.

Microsoft bought the popular game when it acquired Mojang in 2014 for $2.4 billion. 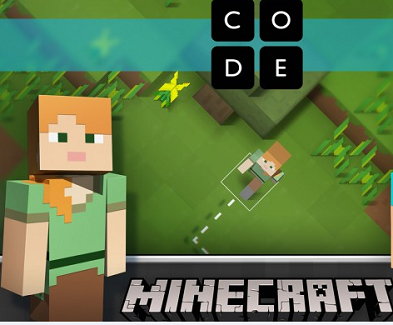 "A core part of our mission to empower every person on the planet is equipping youth with computational thinking and problem-solving skills to succeed in an increasingly digital world," said Microsoft CEO Satya Nadella in a statement. "With 'Minecraft' and Code.org, we aim to spark creativity in the next generation of innovators in a way that is natural, collaborative and fun."

The Hour of Code will be held during Computer Science Education Week, December 7-13. It is a campaign to broaden global participation in computer science by introducing basic programming concepts to a wide population in just an hour.

Teaching children basic coding skills has been a hot topic this year, even prompting the mayor of New York to promise it will be part of every child's education.

"The Hour of Code is a one-hour introduction to computer science, designed to demystify code and show that anybody can learn the basics. Every student should have the opportunity to learn computer science. It helps nurture problem-solving skills, logic and creativity. By starting early, students will have a foundation for success in any 21st-century career path," according to Code.org, which was launched in 2013.

There is even a tutorial that does not need a device or Internet connectivity. It turns the students into interpreters of robotic commands. It is described as, "Using a pre-defined 'Robot Vocabulary' students will figure out how to guide each other to accomplish specific tasks without discussing them first. This lesson teaches children the connection between symbols and actions, as well as the invaluable skill of debugging."

Larry Loeb has written for many of the last century's major "dead tree" computer magazines, having been, among other things, a consulting editor for BYTE magazine and senior editor for the launch of WebWeek. He has written a book on the Secure Electronic Transaction Internet ... View Full Bio
We welcome your comments on this topic on our social media channels, or [contact us directly] with questions about the site.
Comment  |
Email This  |
Print  |
RSS
More Insights
Webcasts
Making XDR Work in Your Enterprise - May 12
Data Center Network Operations (NetOps) Reimagined
More Webcasts
White Papers
Intelligent Outcomes Are Key to Business Resilience
Are We Cyber-Resilient? The Key Question Every Organization Must Answer
More White Papers
Reports
The InformationWeek 2021 State of ITOps and SecOps Report
The State of CCPA 2021
More Reports