Protesters are criticizing the economic and social impact of robots. Doomsayers are likening the AI revolution to the end times. Here's why they're mistaken. 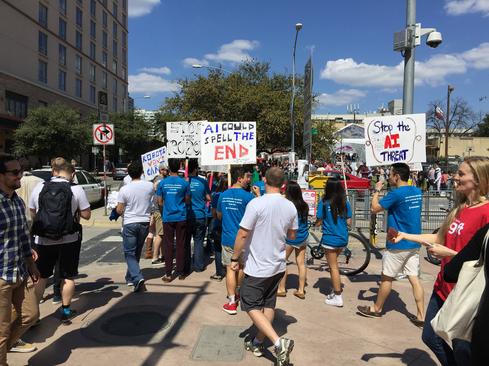 Protesters wearing matching shirts and carrying picket signs took to the streets of Austin, Texas, on March 14 during SXSW 2015.

Their uniting chant: "Stop the robots."

The organization behind the protest -- named, aptly enough, Stop the Robots -- was at SXSW to make a statement about the dangers that artificial intelligence technologies pose to the economy, society, humanity, and the planet.

(Also, of course, to direct people to its website, stoptherobots.org.)

These anti-AI concerns have picked up a lot of steam recently -- and in unexpected places. Science fiction writers and low-class Luddites are no longer the only ones spreading these fears. The technocrati have joined them.

Elon Musk, founder of Tesla and SpaceX and co-founder of PayPal, may be the most prolific contemporary AI fearmonger. Musk has made numerous headlines of late for his outspoken predictions that AI will be the biggest danger to mankind -- likening AI to a "demon."

In January, Musk announced that he would be making a $10 million donation to the Future of Life Institute to "keep AI beneficial to humanity" -- and make sure it doesn't turn evil.

Are robots inherently dangerous? Peter Thiel, Musk's former PayPal partner, doesn't think so. In an interview at The Economist's Buttonwood Gathering on February 10, Thiel made the argument that there are so many human-made barriers to life-improving and life-saving innovation -- including regulatory constraints and general Luddite fearmongering -- that we need to start stepping out of the way of technological advances.

"There are many reasons people are scared of technology; they're scared of innovation," Thiel told his audience. "We live in a society, in a culture, that's dominated, I think, by fear and hostility towards technology and science. And my view would be that a lot of these fears and hostilities are somewhat misplaced, but they are powerful drivers."

How misplaced are these fears? And what are the fears, precisely? On the following pages, we highlight the top four complaints about robots -- and provide our rebuttals to the AI naysayers. Once you've reviewed these, tell us what you think in the comments section below.

Joe Stanganelli is founder and principal of Beacon Hill Law, a Boston-based general practice law firm. His expertise on legal topics has been sought for several major publications, including US News and World Report and Personal Real Estate Investor Magazine. Joe is also ... View Full Bio
We welcome your comments on this topic on our social media channels, or [contact us directly] with questions about the site.

"Online dating today is just 'algorithms,'" complains Stop the Robots on the organization's website. "We believe this is too mechanical and impersonal. The strongest relationships are best formed through people, not robots."

10 IT Trends to Watch for in 2021 Cynthia Harvey, Freelance Journalist, InformationWeek,  12/22/2020
White Papers
What To Consider Before Renewing Your SD-WAN
Zero Trust Evaluation Guide
The Insecure State of Microsoft Teams Security
From MFA to Zero Trust
Passwordless: The Future of Authentication