Take a closer look at Microsoft's radically revamped Windows 8 OS, out now in a consumer preview version. Here's the lowdown on features, apps, hardware, and more. 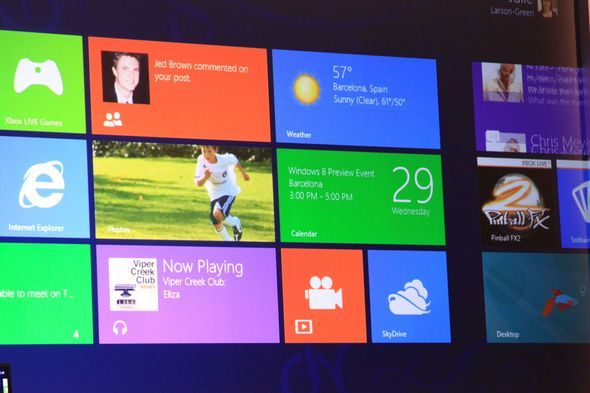 Microsoft unveiled the consumer preview of its Windows 8 operating system on Wednesday from Mobile World Congress in Barcelona. Microsoft has made more than 100,000 changes to the OS since its September developer preview release, according to Windows president Steve Sinofsky.

Windows 8, which likely won't be available as a shipping product for some time, marks an aggressive turn for Microsoft. The completely revamped OS borrows heavily from the Windows Phone 7 user experience, with the Metro-style interface. Just as important, it brings together many types of user input--from touch to keyboard to mouse. This, along with Apple's continued moves with its OS (Lion, and now Mountain Lion), paint a future that blends the worlds of phone, tablet, and PC, at least from a user interface point of view.

Windows 8 will ship on x86 and ARM-based systems, and Sinofsky said that all hardware platform development, which includes tight partnerships, is on track and on equal footing.

Microsoft unveiled nice little treats, like showing off Windows 8 running on a variety of devices, from tablets to ultrabooks to self-contained PC displays, and even a couple of concept devices, like an 82-inch monitor made of optically-bonded Gorilla Glass with subpixel depth. Michael Angiulo, corporate VP of Microsoft Windows planning and ecosystem, said that using this feels like you're actually moving each Windows tile by hand; he even hinted that this could become the next-generation TV experience. Angiulo also showed a cube-shaped, AMD-built concept PC, about the size of his hand, and demonstrated how it could drive two large monitors, splitting apps between them.

In other words, Angiulo wanted to show off a range of hardware partners, from system-on-a-chip companies like nVidia, TI, Qualcomm, and even Intel, to device manufacturers like Samsung, to Ultrabook makers like HP, Dell, and Lenovo. Angiulo showed off the Lenovo Yoga, which flips from Ultrabook to a more tablet-like mode. Angiulo, and other Microsoft executives (Windows program management VP Julie Larson and Windows web services VP Antoine Leblond), each showed off the different user input options (gesture, mouse, keyboard) on a variety of different hardware.

All of this hardware is important, of course, but so too are developers. Microsoft made a big deal of swiping through screens full of apps in almost every demo, just to showcase the breadth of apps so far. The company hosted an app contest and announced its eight big winners.

So the hardware players are on board, the apps are in the works, now it's time to get end users. The company is making the consumer preview available for download, and this includes all of the apps in the Windows app store. Sinofsky said Microsoft would unveil the enterprise preview at CeBIT next week in Hanover, Germany, including a few more features that help enterprise IT manage Windows 8. He did demonstrate one feature, called Windows To Go, where an entire system image goes onto a USB drive and can be used to gain access to profile information and apps on any other machine.