Social media remain fertile ground for hackers to expand their attacks through malware and trendjacking.

The past several weeks have seen numerous articles about the spread of malware via fake Ebola-related emails. Hackers will imitate the CDC, WHO, or major news outlets like CNN to spread dangerous links. Shocking headlines -- "Ebola virus has been cured!" -- entice people to click, resulting in compromised devices and accounts.

The ploy is not limited to email. Social media have also been used to disseminate dangerous information and manipulate users following the Ebola story. Hackers append trending hashtags, most commonly #Ebola, to amplify the scope of their attack -- a tactic known as trendjacking.

[Social networks can be both hero and villain during public panics. Read #Ebola Lessons: How Social Media Gets Infected]

By attaching an unrelated hashtag on to their own content, hackers capitalize on the popularity of the hashtag to target a larger audience. Users looking for information on social media need to be vigilant. The following precautions will help you avoid malicious links on social media. 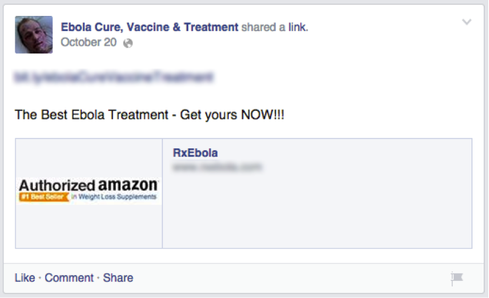 Check the profile
The posting profile can be a revealing element in the equation of social media safety. Hackers will often use botnets (large networks of automated accounts) to spread malware and repost content. Bots are frequently programmed to trendjack popular hashtags, such as #ebola. The following features are common botnet giveaways:

Check the link
Generally, link analysis requires advanced algorithms that analyze for hundreds of threat attributes. However, there are a handful of things you can do manually to identify malicious links.

When in doubt, don't click
If you doubt a link is trustworthy, don't risk it. There is plenty of quality literature on the web about events like the Ebola epidemic, and you can find it safely by searching directly. Don't get caught up in the panic on social media -- you'll save your devices and accounts from being infected, as well.

Malicious software is morphing to be more targeted, stealthy, and destructive. Are you prepared to stop it? Get the Malware Mutation issue of Dark Reading today.

Evan Blair is a Co-Founder and the Chief Operating Officer at ZeroFOX. Prior to that, he was a member of the Accuvant Leadership Team where he led the multimillion-dollar Partner Solutions practice. Evan began his career as a financial analyst with Dresdner ... View Full Bio
We welcome your comments on this topic on our social media channels, or [contact us directly] with questions about the site.
Comment  |
Email This  |
Print  |
RSS
More Insights
Webcasts
The Failures of Static DLP and How to Protect Against Tomorrow's Email Breaches
ROI and Beyond for the Cloud
More Webcasts
White Papers
The Dark Side of SD-WAN
From MFA to Zero Trust
More White Papers
Reports
How IT Security Organizations are Attacking the Cybersecurity Problem
2020 State of Cybersecurity Operations and Incident Response
More Reports

"The ploy is not limited to email. Social media have also been used to disseminate dangerous information and manipulate users following the Ebola story. Hackers append trending hashtags, most commonly #Ebola, to amplify the scope of their attack -- a tactic known as trendjacking."

Evan, hackers are hanging around the places where they can get maximum attention (victims). Social medias are platforms, where most of us are hang around and most of us are using it very carelessly.
Reply  |  Post Message  |  Messages List  |  Start a Board
Editors' Choice
Hot Topics

10 IT Trends to Watch for in 2021 Cynthia Harvey, Freelance Journalist, InformationWeek,  12/22/2020
White Papers
MPLS, SD-WAN and SASE
The Network for Whatever's Next; A CxO Guide
A Practical Guide to SASE Migration
From MFA to Zero Trust
Two-Factor Evaluation Guide