Here's a look at seven emerging technologies that will disrupt your business, marketplace, and culture.

What if you could have anticipated the impacts of the iPhone a year before it was introduced, or known about how the Internet and the Web would connect the world of computers before it actually happened. That would give you an insight into the opportunities ahead and an advantage in prepping for those opportunities.

In a Gartner Data and Analytics Summit keynote address, Willful Disruption: Seven Digital Disruptions You Might Not See Coming, chief Gartner Fellow and managing VP Daryl Plummer provided a future-looking perspective that examined some of the technologies on the horizon that could change the course of businesses, markets, and culture.

Spoiler alert: Blockchain is not among them this time.

"You guys should play blockchain bingo every time you come to one of these events," Plummer said during this keynote address at the Gartner Data. "Every time you hear the word blockchain, you have to take a drink." 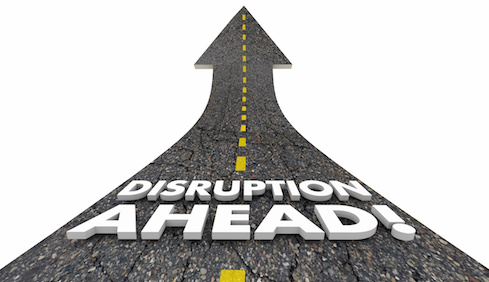 Plummer said there are five different types of disruptors -- offense innovation (like the iPhone), defense competition (like Android, promoted as a competitive move against iPhone), serendipity/chance (like Craigslist, which was never intended to replace newspaper classifieds but did), destructive or anarchistic models (like Blockbuster and Netflix), and self-disruption/reinvention. That last one is when you disrupt yourself before someone else does it for you, Plummer said. He recommends enterprises schedule "disruption meetings" -- brainstorming sessions where organizations can discover possible ways to disrupt themselves.

Plummer said that future disruption should be measured both by its intensity and its secondary effects. With that in mind, he identified seven technologies on the horizon that have the power to change the world. The following are those seven digital disruptions:

Ask for a definition of quantum computing and you are likely in for an education in physics concepts. But experts say that this technology will leverage quantum mechanics to get huge improvements in processing power.  Plummer said that a quantum computer can do things that a digital computer can't, but a quantum computer doesn't do everything that a digital computer does well. To provide an idea of the potential, mind-boggling scale of quantum computing, Plummer said that 300 fully entangled qubits can manipulate as many classical bits of information as there are partials in the universe. There's still a way to go before the technology can do any of this. For instance, there are cooling issues that need to be addressed. But on the positive side of things, the technology could have massive implications for drug discovery. But it could also end up breaking any encryption.

Plummer recommended that CIOs beware the hype around this technology, but they could explore quantum computing's potential in the cloud.

There is some early technology available already that is starting to perform this kind of service, Plummer said, including Babel Fish, Google Translate Pixel Buds, Skype Translator, and Waverly Labs Pilot Earbuds.

As this technology improves and matures, it will disrupt intercultural language barriers and the language translation job and business role. Plummer noted that the consequences of delayed translations are not always bad, and there may be unexpected secondary impacts in a world where everyone can understand everyone else instantly.

To get ready for this disruptive change, CIOs should equip employees with experimental real-time translators in international jobs to pilot this streamlined communication.

Sure, this one has been around for a while, but as the technology matures, it has the potential to disrupt everything, Plummer said. Nanotechnology is the manipulation of matter on an atomic, molecular, supramolecular scale. It could lead to a host of applications, according to Plummer, including self-healing material, smart contact lenses, and organic 3D printing.

CIOs should expect an impact on IoT devices, plan for security threats from remote nanosensors, and review carbon nanotube computers.

Swarms are like bees or ants. They are individually autonomous, but they work together for the benefit of the whole. If one member of the group fails, another member can take its place. Swarm intelligence will disrupt optimization problem solving, single-point AI systems, and complex system interactions, according to Plummer. To prepare, CIOs should survey the research on swarm intelligence for applications in collaborative problem solving and analytics, and they should plan for AI solutions using swarms to support networked edge devices in the field.

Plummer said that "superabilities" are emerging, but not in the singularity. For instance, he notes, that amputees are equipped with "blade" prosthetics for legs that allow them to run faster, and hearing devices can give humans super hearing capabilities. Further development is coming in the form of brain/computer interfaces and nano-implants for "mind"-link technology, according to Plummer.

The disruption here is that disabilities become superabilities. CIOs should investigate speedy thought control for noisy or chaotic environments, and they should enhance disabled access to compute technology using brain-computer interfaces.

Sure, there are software ecosystems. You can get access to a host of applications via AWS or Salesforce.com, for instance. But what if you could pay a single subscription fee for all the software you use? Plummer called this a software distribution revolution, and it's a $450 billion market that is at stake. These marketplaces would leverage existing contract terms, provide dynamic updates (or no updates), simplify procurement, provide great variety, revolutionize APIs, and more. The emergence of these will disrupt software distribution and ownership.

Plummer said that disintermediation of the smartphone will start when device manufacturers take control of the fabric for communication and access.

To get ready for this, CIOs should consider devices that operate independently of established carriers and networks, use wearability of technology as a guiding principle for mobility rather than apps, and establish a skunkworks to test-drive personal devices traveling in and out of the firewall.

Jessica Davis is a Senior Editor at InformationWeek. She covers enterprise IT leadership, careers, artificial intelligence, data and analytics, and enterprise software. She has spent a career covering the intersection of business and technology. Follow her on twitter: ... View Full Bio
We welcome your comments on this topic on our social media channels, or [contact us directly] with questions about the site.
Comment  |
Email This  |
Print  |
RSS
More Insights
Webcasts
Making XDR Work in Your Enterprise - May 12
Data Center Network Operations (NetOps) Reimagined
More Webcasts
White Papers
Global software company contracts with CBTS for Virtual CISO
Top 5 Tips for Enterprises Choosing a Firewall
More White Papers
Reports
Planning Your Digital Transformation Roadmap
Intelligent Outcomes Are Key to Business Resilience
More Reports