State of IT in 2017 shows stresses of expectations of the 'customer era,' need for advanced skills sets on beleaguered staffs.

In its second annual State of IT report, Salesforce has captured a snapshot of how artificial intelligence may be changing business and how high performing IT teams differ from their lower performing counterparts.

If nothing else, it captures a picture of what the IT role may look like in the future "in a customer-driven era," according to the survey's report announced in a Salesforce blog on April 26.

Salesforce Research, a unit of Salesforce, presented a questionnaire to 2,263 full-time IT professionals, who were not limited to Salesforce customers. In the U.S., and Canada, there were 753 respondents; 1,005 from Europe, including the U.K., Ireland, France, Germany and the Netherlands; and 505 from Japan, Australia and New Zealand. The questionnaire was presented as a blind survey and the sponsor's name wasn't listed. All responses came from "third party panelists" or pre-qualified respondents supplied by third parties as meeting the goals and criteria of the survey. The survey was not limited to Salesforce customers.

Want to learn more about the impact of artificial intelligence? See AI to Become Key Competitive Factor by 2020, says Tata.

IT is undergoing a significant evolution and is now at a crossroads, working as a strategic partner with marketing, customer service, sales and other lines of business to further digitize the corporation. All business units want to achieve a deeper, long lasting connection through the customer experience. It's more easily said than done, and IT must juggle initiatives that attempt to meet those goals.

Working with the business units makes IT "the central nervous system driving business success" instead of an auxiliary service. Part of the change is moving from an infrastructure cost center to "a value-based service brokerage enabling business transformation," the Salesforce report said.

Another key takeaway is how innovation has displaced maintenance issues. "Top teams are more likely to say it's a critical priority to innovate not only for differentiation but for industry disruption," the report concluded. Achieving constant innovation, however, is a large goal that faces a skills gap in many IT areas, the report said. 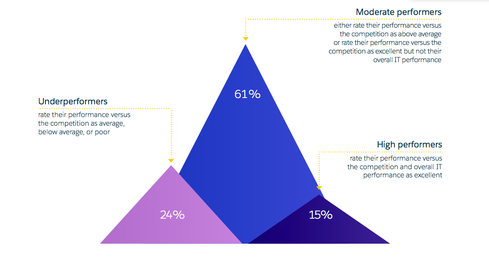 A third takeaway is the need for speed as a top priority. The value of the innovation may depend on its speed to market, a key performance indicator. The need for speed means giving business users "some app-building capabilities," the report said, although the prospect worries IT managers paying attention to security and data governance. Low-code techniques are under consideration by some IT staff, including those belonging to the high performance group.

Perhaps the most significant takeaway was number four, the growing expectation that artificial intelligence will have a big impact on how the enterprise conducts its business. Not everyone shares a sense of urgency in adopting AI, the report said, but the high performers are expecting it to get implemented across the business and don't want to lag behind the appetite for it. That appetite is particularly high in the sales department.

As businesses have grown to understand that customers are seeking low-friction experiences like they encounter with online purchasing or online lookup of desired information, business units have realized they're now driven by that consumer expectation. Eighty-one percent of the respondents said that was the case; 79% believe IT is the driver of the business' consumer expectation initiatives.

Even though most IT organizations appear to believe transforming the customer experience is an emerging trend, the high performance organizations were 2.8 times more likely to say it was the "critical priority."

By a similar margin high performance organizations said their own employees' digital experience at work is a higher priority now than two years ago. Regardless of performance level, 70% agree that employee satisfaction scores are now a key performance indicator for IT.

Seventy-seven percent said IT functions as an extension of the business unit instead of as a totally separate corporate service. The line between IT and business units blurs as the company attempts to more thoroughly digitize itself, the report said.

To improve the customer experience, lines of business need a single view of the customer but only 29%  of respondents said they achieved an integration level of 75% of needed data sources. The data too often is locked away in a legacy system with a different security model than the modern system that needs it. In addition, IT managers say they don't control up to 42% of the technology in use by the enterprise and that contributes to the lack of a single view.

Innovation may be on nearly everybody's list as a priority, but the high performers see it as vital to offsetting the potential for being disrupted in their industry. Overall, 56% say innovation for disruption is critical. High performance IT staffs, however, were 3.5 times as likely to declare innovation was crucial to avoid disruption compared to underperforming departments.

Likewise, higher performing departments were 4.4 times as likely to see improving the employee digital experience in the business a critical priority versus underperforming IT units.

Both innovation and improving the employee experience can be combined with the tendency to rate achieving a single view of the customer as a critical priority as the three factors that define what it means to be a high performance IT unit, the State of IT report said.

Talent gap in areas where it hurts

At the same time, those most interested in making use of artificial intelligence, big data analytics, a single customer view and improving the customer experience are finding it difficult to fill all their positions. For 20% of organizations, skills are in short supply for such things as data science, mobile development, full stack development and the Internet of Things. Thirty percent of respondents said they expected this skills gap to grow, not shrink, over the next two years.

So in 2017, IT finds itself trying to further its alignment with the business, get closer to the customer and keep internal employees humming and happy. Several years of flat budgets and slow growth appear to be coming to an end as the importance of IT in implementing the latest business objectives has grown. But it's still going to be a struggle. Ambitious goals will be hard to meet without the right personnel to fill leading edge positions. In that sense the new era of customer expectations resembles the old ones of staff reductions and flat budgets: there's still obstacles to overcome.

Charles Babcock is an editor-at-large for InformationWeek and author of Management Strategies for the Cloud Revolution, a McGraw-Hill book. He is the former editor-in-chief of Digital News, former software editor of Computerworld and former technology editor of Interactive ... View Full Bio
We welcome your comments on this topic on our social media channels, or [contact us directly] with questions about the site.
Comment  |
Email This  |
Print  |
RSS
More Insights
Webcasts
Nip Ransomware in the FUD: Detecting Attacks Pre-Encryption
Cybersecurity's Next Wave: What You Should Know
More Webcasts
White Papers
Sunburst: Impact and Timeline
Intelligent Outcomes Are Key to Business Resilience
More White Papers
Reports
Are We Cyber-Resilient? The Key Question Every Organization Must Answer
Building the SOC of the Future
More Reports