A Web surfer in Burlington, Vt., scans Weather.com during a local storm, and clicks a small ad that signals a bargain near his home. When the full ad appears, it informs him of a sale on snow shovels at a nearby Shaw's grocery store.

That ad is an example of what MyWebGrocer, an online ad network and coupon engine, can do for its many grocery store clients. Clicking the small ad sends a signal to the Google DoubleClick ad network that a site visitor might be a good target for an ad on a nearby special sale item.

To Chuck Megivern, senior software engineer at MyWebGrocer, the ad is an example of the service his firm provides to a large number of grocery retailers. Starting with 10,000 grocery retail outlets, MyWebGrocer is building a "digital ecosystem" on top of that base of information, thanks to the additional third-party services available in the emerging API economy.

A key hub for MyWebGrocer is its API Manager servers, which handle requests for service from customers at the rate of 100 to 400 per second. An open source server produced by WSO2, API Manager not only fields requests from end-users but conducts a lot of server-to-server traffic as different services on the Internet respond to queries from MyWebGrocer systems.

In the case of the Burlington Web surfer, his click on the snow shovel ad prompted a call to Google's DoubleClick advertising network, which used a background geographical location system to come up with his zip code. That information went back to MyWebGrocer, which used its database of grocery specials to come up with an item that a Weather.com reader might be interested in. To cap the process off, MyWebGrocer was able to identify the store closest to the consumer where he could find a reduced-price shovel.

In the API economy, advertising can become much more focused, personalized, and targeted to the weather, for example, or another specific event happening at that time and place.

MyWebGrocer, for example, collects and digitizes millions of lines of advertising circulars for dozens of grocery store chains. That type of advertising used to have a shelf life of only one or two days, and would reach only subscribers to the newspaper in which the circular was distributed -- or shoppers who are already in the store. With readership of newspapers falling off, those newspaper circulars can get recycled as MyWebGrocer picks up the data.

Is it time to make stuffing for the turkey, or that special orange cranberry bread for the holidays? MyWebGrocer has agreements with recipe sites to present visitors with small ads that blossom into information on whatever subject the visitor is interested in, as indicated by his or her click stream. MyWebGrocery responds with promotions on needed ingredients, along with nearby locations where they can be found at the best price. 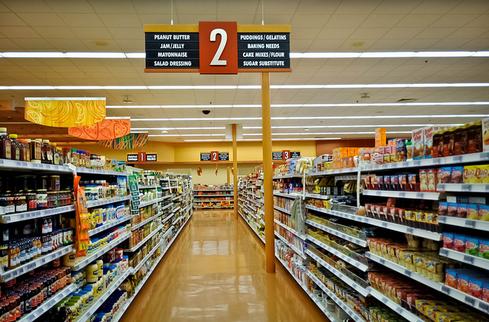 When Megivern refers to a "digital ecosystem," he means his firm is learning how to add additional users to its grocery retailer base. If several retailers have decided at the same time that it's "Nestle's hot chocolate season," for example, MyWebGrocer can propose to Nestle that it use its service to sponsor a coupon. This also enables manufacturers and retailers to tap into local market forces, since manufacturers aren't necessarily in tune with what individual retailers are doing when the temperature takes a sudden drop in New England, for example, or a major hurricane sweeps inland from the East Coast.

Megivern pointed out that such a pyramid of services -- the latest based on information collected for its predecessors -- wouldn't be possible without strict API management. Each new service requires a revision to the MyWebGrocer API to route traffic efficiently down to a new application, and API Manager tracks and manages the API's changes.

The API Manager must include a throttle that recognizes when a momentary burst of traffic has exceeded the limits of the underlying systems and some requests must be queued up. If requests are backing up in the queue with no outlet, it's time to add more servers to those underlying systems.

Megivern said MyWebGrocer handles scale-out issues by having servers both on-premises and in the cloud in a hybrid operation. The firm has implemented caching techniques that enable the system to respond to a request in 8 milliseconds.

MyWebGrocer has been using both products for a year to help expand the business. "We chose WSO2 because it's open source. We can go into their repository and see how the code works," Megivern explained. He cautioned adopters to take care as they put each version into production, however, because WSO2 changes the code frequently, and users must test each new version for themselves. It's possible to boost the power of the servers running API Manager to speed calls to the underlying applications, he added, but that will do little good unless you also increase the power of the background servers.

"The thing I've kind of learned from experience is, you have to see where all the bottlenecks are and keep a balanced pipeline," he said.

Our latest survey shows growing demand, fixed budgets, and good reason why resellers and vendors must fight to remain relevant. One thing's for sure: The data center is poised for a wild ride, and no one wants to be left behind. Get the Research: 2014 State Of The Data Center report today. (Free registration required.)

Charles Babcock is an editor-at-large for InformationWeek and author of Management Strategies for the Cloud Revolution, a McGraw-Hill book. He is the former editor-in-chief of Digital News, former software editor of Computerworld and former technology editor of Interactive ... View Full Bio
We welcome your comments on this topic on our social media channels, or [contact us directly] with questions about the site.
Comment  |
Email This  |
Print  |
RSS
More Insights
Webcasts
Are You Ready for When Cyber Attackers Get In?
Linking, Orchestrating, and Managing Your Enterprise Security Systems
More Webcasts
White Papers
NetFlow vs Packet Data
[IT Trend Report] The Future of Cloud
More White Papers
Reports
Can You Spare 10-12 Mins to Help Us Out with a Survey on Tech Trends?
Got 7 Minutes? Dark Reading Needs Your Help With Our Survey on Incident Response
More Reports

Chuck Mcgivern actually referred to a hypothetical consumer on Weather.com who had accessed the site from Winooski Falls, Vt., just outside Burlington. MyWebGrocer has offices there and it had snowed a foot there shortly before the interivew. MyWebGrocer offers applications for buying grocers online from different retailers. That's a small percentage of grocery shopping overall today. By 2019, it's expected to be a $100 billion business, according to Packaged Facts, an industry researcher,