50%
Tweet
Check out what IT pros had to say about VMware's recent licensing policy change in this InformationWeek.com survey. 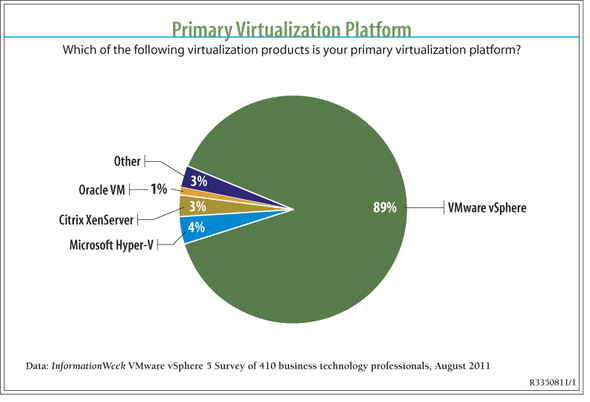 When VMware announced version 5 of its vSphere product on July 12, the technical advances that came with the announcement were universally praised, but a new licensing policy was roundly denounced by users and pundits. To determine user plans for vSphere 5 in the wake of the controversy, InformationWeek asked 410 IT pros about their plans for virtualization in general and VMware in particular. We also asked whether and how the new licensing policy would affect adoption plans. (See "VMware Pricing Controversy: Users Say Microsoft Door Open" for more information.)

The survey reveals that VMware customers intend to continue their efforts to "scale up" by purchasing more capable equipment. But while the move from the predominant two socket systems largely in used today to four socket systems is fairly gradual, the adoption of larger RAM configurations is much more aggressive. The result: While most users may not see increased licensing costs now, it's highly likely that those costs will go up substantially as IT teams adopt subsequent generations of server hardware. As a result of concerns largely arising from pricing and licensing policies, our survey shows that buyers are slowing their adoption plans and considering VMware alternatives. Now that the company charges based on configured RAM use, VMware customers must also re-examine well-established techniques such as over-provisioning, a technique used by many to assure smooth operation of virtual machines. We expect to see competitors ramping up their marketing machines with messages of simpler licensing and better economics. Dig in for a complete look at the InformationWeek.com research numbers.

VMware rules the market. It's likely that since our survey specifically asked about VMware products, we attracted more VMware users. Most estimates put VMware's enterprise market share at about 80%. IDC's numbers put the market share closer to 50%, but its numbers skew low because some competing products are free and probably not in use.

Comment  |
Email This  |
Print  |
RSS
More Insights
Webcasts
5 Steps to Integrate SAST into the DevSecOps Pipeline
Are You Ready for When Cyber Attackers Get In?
More Webcasts
White PapersMore White Papers
ReportsMore Reports