50%
Tweet
The governance dispute that led Uber and Lyft to abandon Austin could have implications for ride-hailing services in other cities.

On May 7, Austin voters decisively defeated an effort by "ride-hailing" companies Uber and Lyft to override city regulations recently imposed on their operations. Two days later, as they had threatened, both companies suspended operations within the city limits of Austin. 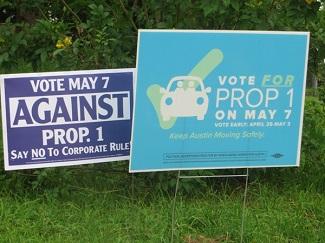 These events have impacted much of the transportation industry and especially the tech world. After all, Austin is considered one of the nation's leading tech and innovative business incubators, having spawned companies like Dell, HomeAway, and Whole Foods as well as world-class events like the South by Southwest music-entertainment-tech festival. For techie Austin to find itself devoid of the most pervasive and innovative high-tech taxi services yet conceived seems, well, inconceivable. So, how did this happen?

Let's start with why it didn't.

To understand the real roots of this conflict requires some background. While Uber and Lyft describe themselves as "ride-sharing" companies, this portrayal seems misleading, since both provide taxi-like services, operated by paid drivers, not ordinary travelers just "sharing" rides with other travelers going the same way. More often they're referred to as "ride-hailing" companies by the media, and "transportation network companies" (TNCs) by government bodies, such as Austin's municipal government.

In June 2014 Uber and Lyft began operating in Austin -- at first illegally, then legally after an October 2014 city council vote gave the TNCs a green light to operate as long as they provided at least a million dollars' worth of commercial automobile liability insurance. But that was a "lame duck" council, since Austin's old at-large governing structure was replaced the next January by a district structure and a whole new crew of council members and new mayor.

And, the new council was definitely not so laissez-faire in its attitude toward the high-tech smartphone-app-based taxi services -- there were concerns about safety, security, and the local regulations in place for decades, supposedly to ensure some modicum of protection for the public. All the other taxi companies had to follow the rules, so why not TNCs?

To Uber and Lyft, that attitude was like a declaration of war. Founded by entrepreneurs priding themselves on their creative and resourceful application of new technology, both companies seemed to regard themselves as sufficiently different from other taxi services to justify exemption from the usual municipal regulatory environment. The battle was joined in December 2015 when the new city council approved an ordinance requiring TNC drivers to pass fingerprint-based background checks (like other taxi drivers). The new rules also insisted that TNCs adhere to other regulations, identifying their vehicles and not blocking traffic lanes to pick up passengers.

Austin has certainly not been alone in this controversy. Other cities across the country have also been facing similar confrontations, including Houston, where Lyft suspended its operations in late 2014 over a fingerprinting rule similar to Austin's, and Uber is also threatening to pull out.

The Uber/Lyft response in Austin was to finance a successful campaign to get 65,000 signatures on a petition for a voter referendum on the companies' own proposed law, which the City Council placed on the ballot as Proposition 1. This would basically reinstate the much looser, more "voluntary" rules passed by the previous council. (The companies also encouraged an effort to recall the main council member leading the regulatory effort, but this failed.) Unless their replacement law was passed, threatened Uber and Lyft, they would cease operations in Austin.

The election campaign could hardly have been more unequal. Uber and Lyft poured as much as $10 million into the campaign for Prop. 1, the most expensive local election in Austin's history. They outspent the opposition (favoring the current council ordinance) by at least 84 to 1. Voters received pro-Prop 1 mailouts several times a week, and TV channels were awash with pro-Prop. 1 commercials. (Some observers speculate that the massive ad blitz itself may have backfired, alienating otherwise neutral voters.)

The result: Prop 1 lost 56% to 44% (a loss of about $200 per pro-Prop. 1 vote, in an election that cost the city "upwards of $500,000" to sponsor). True to their threat, Uber and Lyft suspended Austin operations two days later. (New TNCs, willing to comply with local regulations, have stepped forward to fill the vacuum).

Why were Uber/Lyft so desperate? The most compelling answer seems to be their hostility to regulation, and desire to avoid setting precedents. Fingerprinting, it would seem, was just the final straw.

"Uber and Lyft spent $10 million on this campaign, and ceased service abruptly -- abandoning their drivers and passengers and forgoing more millions of dollars in profits -- for a very specific, and deeply held principle: that they are not subject to government regulation" wrote Nick Barbaro, co-publisher of alternative weekly paper Austin Chronicle after the election.

Mellody Hobson, a CBS News Financial Contributor, reflected the companies' attitude in a May 9 CBS This Morning segment. Fingerprinting, she argued, "... slows down their process ... It will make it harder for them to hire drivers quickly ....”

"But" she added, "the real issue ... It’s back to the same slippery slope about their business model, and not wanting this to lead to those contract workers being considered employees -- which would completely upend their business model ... They would be looking at ... benefits and a total different profit model."

CBS This Morning co-anchor Charlie Rose asked: “But if Uber’s fears were realized, what would it mean to them? Would it dramatically reduce their margins?” Hobson replied emphatically: “It would ... it absolutely would. It would change their business in a very, very big way ....”

The implications in other urban markets were also a huge concern. Writing in Fortune on May 7, Kia Kokalitcheva indicated that regulations like those in Houston and Austin are "also setting an unpalatable precedent that other cities could follow. If anything, the last message Uber or Lyft would want to send to other local and state governments is that they would consent to more layers of regulations."

The ongoing controversy in city after city over Uber, Lyft, and other TNCs raises deeper concerns, such as worker exploitation in a "sharing" economy, the role of fingerprinting in an increasingly surveillance-heavy society, whether new-technology startups should abide by the same rules as their old-technology predecessors, and other issues.

We welcome your comments on this topic on our social media channels, or [contact us directly] with questions about the site.
Comment  |
Email This  |
Print  |
RSS
More Insights
Webcasts
Linking, Orchestrating, and Managing Your Enterprise Security Systems
Getting the Most from Threat Intelligence
More Webcasts
White Papers
[Exclusive InformationWeek IT Trend Report] The Cloud Gets Ready for the 20's
Definitive Guide to Securing DevOps
More White Papers
Reports
Can You Spare 10-12 Mins to Help Us Out with a Survey on Tech Trends?
Got 7 Minutes? Dark Reading Needs Your Help With Our Survey on Incident Response
More Reports